Zinc (Zn) is an essential trace mineral and is the second most abundant micronutrient in the human body after iron. It is vital for many physiological functions and is involved in numerous aspects of cellular metabolism. Zinc is found in large amounts in the brain, muscles, bones, kidneys, and liver, with the highest concentrations in the prostate and parts of the eye. It is needed for the catalytic activity of around 100 enzymes, as well as for immune function, protein synthesis, wound healing, DNA and RNA synthesis, signal transduction, cell division, hair growth, and skin health. In addition, zinc is essential for normal growth and development during pregnancy, childhood, and adolescence and it’s essential for proper sense of taste and smell. To perform these versatile functions, zinc must be distributed properly throughout the body. The adult human body contains almost 2-4 grams of zinc. To maintain a steady state, the body requires zinc intake daily since it cannot synthesize or store zinc. The best sources of zinc include oysters, red meat, poultry, and sea foods. Beans, nuts, and whole grains can also provide some zinc but they may contain compounds that prevent zinc from being fully absorbed. The daily zinc requirement depends on the age and it varies between 8 milligrams to 13 milligrams for adults. Zinc is absorbed primarily through the small intestine, and excreted primarily through the gastrointestinal tract with some secretion through the urine and sweat. 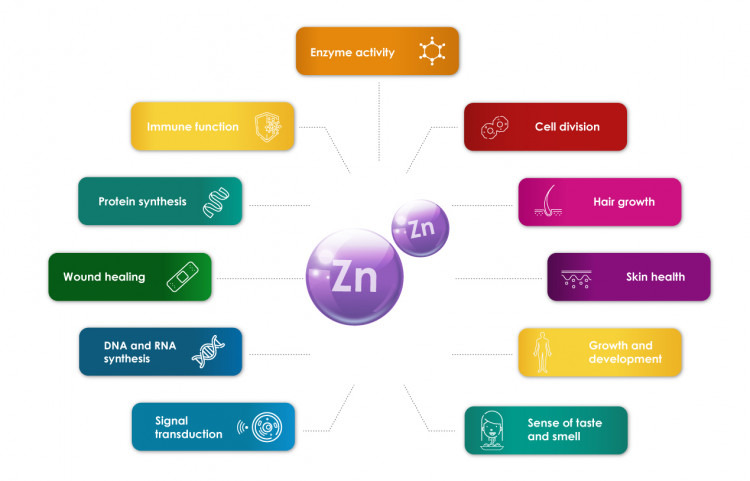 What are the causes of zinc deficiency?

The leading causes of zinc deficiency in humans include reduced dietary intake, inadequate absorption, chronic illnesses, increased body system usage (like during pregnancy and lactation), or increased zinc loss (burns, hemodialysis, hemolysis, diarrhea, etc.). In addition, people who undergo gastrointestinal surgery like weight loss surgery and people who suffer from digestive disorders have decreased zinc absorption and increased zinc loss in the urine. Vegetarians and vegans are at high risk of zinc deficiency too because they don’t eat meat which is a good source of zinc. Also, alcoholics have less zinc because alcoholic beverages decrease the amount of zinc that the body absorbs and increase the amount lost in the urine. 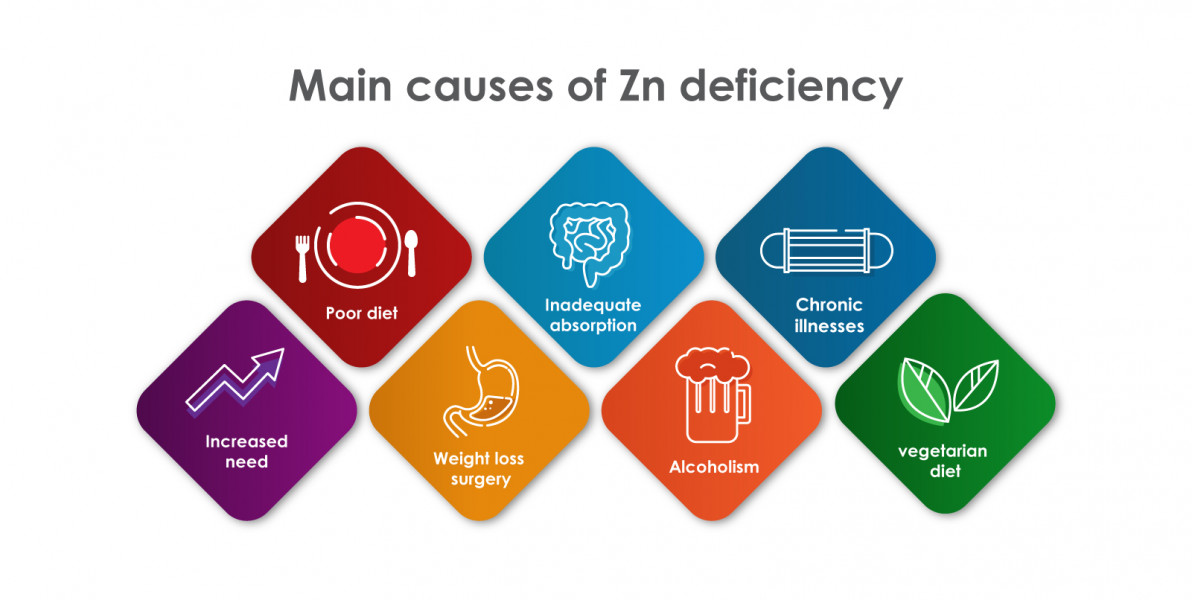 What are the health problems caused by zinc deficiency?

Zinc deficiency may affect up to two billion people in the world and is most prevalent in developing countries. The at-risk population is comprised of children and elderly adults. Globally, 17.3% of the population is at risk for zinc deficiency due to dietary inadequacy; this number is up to 30% in some regions of the world. The World Health Organization (WHO) recognized zinc deficiency as a major disease risk factor. Zinc deficiency is characterized by growth retardation, loss of appetite, impaired immune function, and infections. In more severe cases, zinc deficiency causes hair loss, diarrhea, delayed sexual maturation, impotence, hypogonadism in males, and eye and skin lesions. Weight loss, delayed healing of wounds, taste abnormalities, cognitive impairment, and mental lethargy can also occur. Some psychological disorders like schizophrenia and depression are also linked to low zinc levels. Zinc deficiency during pregnancy has an adverse effect on both mother and fetus. Insufficient zinc in the mother can interfere with both the sequencing and efficiency of the birth process. Mothers suffering from zinc deficiency may also have difficult labors, hemorrhaging, uterine dystocia, placental abruptions, abortion, and fetal defects. Moreover, zinc deficiency is thought to be a leading cause of infant mortality. During childhood and infancy, a time of rapid growth and development, zinc deficiency can affect many metabolic processes. Low maternal zinc status has been associated with less attentiveness and with worse motor functioning. 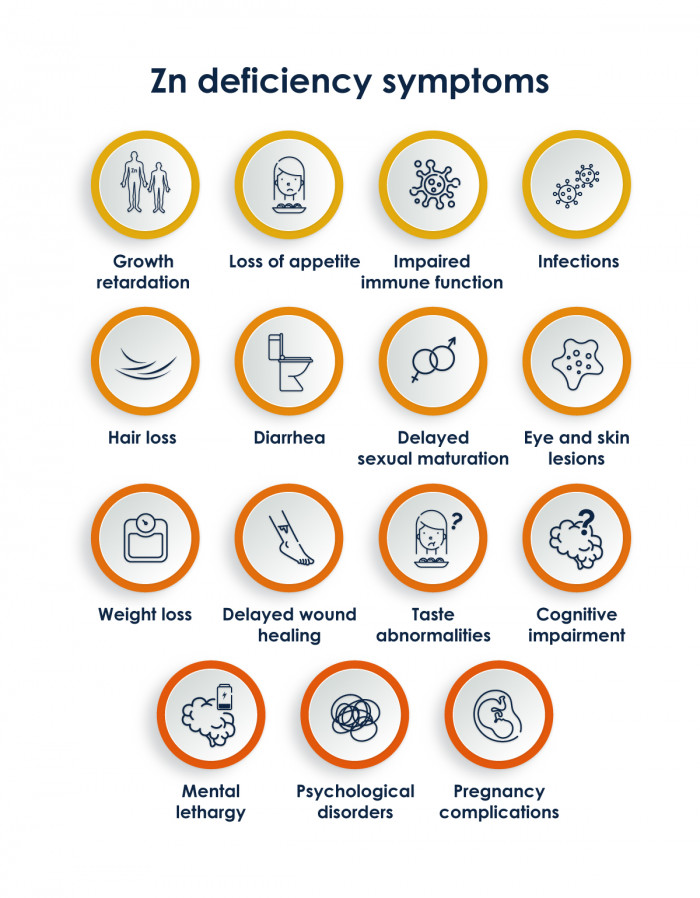 Why liposomal zinc is the best zinc supplement?

Some people need to take zinc supplements to meet their daily requirements. The amount of zinc absorbed by the body is highly dependent on its bioavailability. Some components of the food, such as phytates, calcium, and phosphate, can reduce zinc bioavailability and inhibit its absorption. Also, zinc may interact with some medications, including some antibiotics and diuretics that can lower zinc levels in the body. Even when the zinc supplements are well-absorbed, some people may experience stomach upset after taking them. To solve these issues liposomal delivery systems have been developed. Liposomes can encapsulate zinc and protect it from interactions with food compounds that negatively affect its absorption. Liposomes absorb from a different pathway than other medications. This will prevent zinc interaction with other medications and drugs that can reduce its bioavailability. Moreover, liposomes don’t allow zinc to be in direct contact with gastric mucosa, hence reducing gastrointestinal upset and other side effects. Along with all these benefits, liposomes are also uptake by cells more effectively and remain in the bloodstream for a longer period. To be more effective, liposomes need to have a small size in the range of nanoscale. Nanoliposomal zinc is the best zinc supplement due to its superior bioavailability, longer circulation time, higher stability, and no side effect. 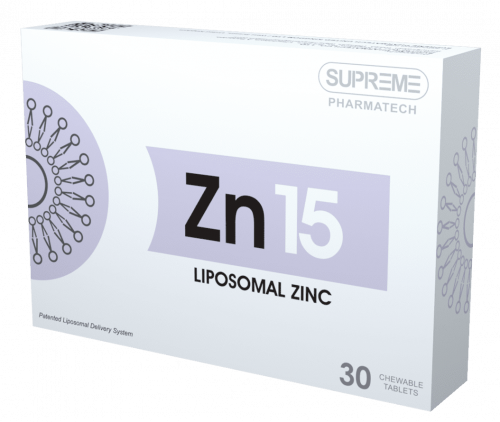