Iron is a chemical element with the symbol Fe. It is the most common element on Earth by mass, higher than oxygen (32.1% and 30.1%, respectively). Iron forms much of Earth's outer and inner core and is the fourth most common element in the Earth's crust. For humans, iron is an essential element for physical growth and neurological development. The body uses iron for various crucial functions. Iron is necessary to make hemoglobin, a protein in red blood cells that transports oxygen from lungs to body cells, and myoglobin, a protein that provides oxygen to muscles. The body of an adult human contains about 4 grams of iron mostly in hemoglobin and myoglobin. Iron is also necessary for cellular functioning, resistance to infections, and the synthesis of DNA and some hormones. Iron is also the metal at the active site of many important enzymes dealing with cellular respiration and oxidation and reduction in plants and animals. Dietary iron has two main forms: heme and nonheme. Plants like beans, peas, lentils, dark leafy greens, nuts, and iron-fortified foods contain nonheme iron only, whereas meat, seafood, and poultry contain both heme and nonheme iron. Heme iron is better absorbed by the body (about 15-35%) than non-heme iron (about 2-20%). As a result, vegetarians who do not eat meat, poultry, or seafood need almost twice as much iron as meat-eaters. According to the National Institutes of Health (NIH), the amount of iron you need each day depends on your age, your sex, and whether you consume a mostly plant-based diet.

What are the causes of iron deficiency?

Deficiency of iron occurs mainly during rapid periods of growth and development, such as during early childhood, adolescence, and pregnancy, although it can occur at other stages of life as well. It is mainly associated with poor diet, malabsorptive disorders, blood loss, and vegetarian and vegan diets. Moreover, the nutrient contents of fruits and vegetables have declined during the past few decades. Studies have shown a significant decline in the levels of minerals, including iron in these foods over time. An explanation for this decrease is linked to the modern agriculture process that is set to increase crop yield that results in the accumulation of carbohydrates (starch, sugar, fiber) without a proportional increase in mineral content. Moreover, these processes can ruin soil health and fertility. This can also affect meat-eaters because livestock eats less nutrient-dense grasses and grains, which has led to a decline in the nutritional value of meat and other animal-derived products. 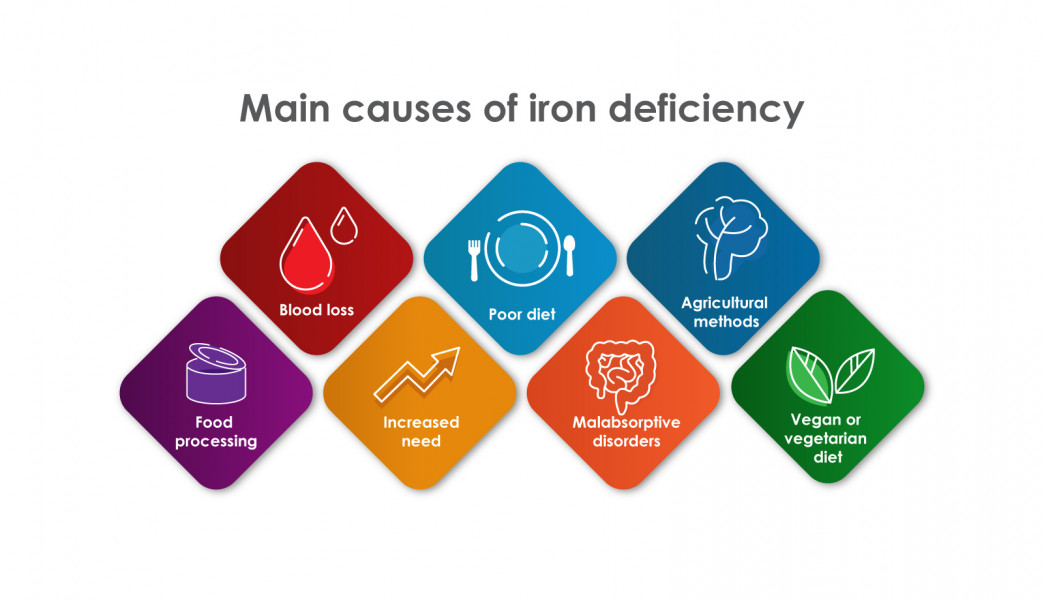 What are the health problems caused by iron deficiency?

Iron deficiency is the most prevalent nutritional deficiency worldwide, affecting an estimated two billion people. It is estimated that 40% of pregnant women and 42% of children worldwide have iron deficiency. According to World Health Organization (WHO) reports, anemia among children under five may be as high as 80% in some African countries and around 25% in European countries. The deficiency of Iron can have profound and irreversible effects on the brain development of children under the age of two. Eventually, this can negatively affect learning and school performance later in life. Moreover, if a pregnant mother is iron- deficient during her last trimester of pregnancy, a child's cognitive ability can be adversely affected. The effects of iron deficiency on pregnant women include anemia, reduced birth weight, and shorter gestation periods. A deficiency of iron in adults can also cause fatigue, dizziness, hair loss, pale skin, shortness of breath, impaired immune function, weakened physical performance, and reduced work productivity, along with a negative impact on social activities. According to WHO reports, a total of 800,000 deaths worldwide are attributable to iron deficiency, 1.3% of all male deaths and 1.8% of all female deaths. The WHO also reports iron deficiency causes the loss of about 25.9 million healthy life years because of non-fatal outcomes like cognitive impairment. Moreover, deficiency of iron is considered to be the most common cause of anemia. Anemia is a serious global public health problem and is associated with increased risks for maternal and child mortality. Anemia is characterized by an insufficient supply of red blood cells (erythrocytes) or hemoglobin. A lack of iron reduces the production of the protein hemoglobin in the body. Oxygen is bound to hemoglobin, allowing red blood cells to supply oxygenated blood to all parts of the body. Iron deficiency anemia limits the productivity of individuals and reduces work capacity. If not treated iron deficiency anemia can result in problems like irregular heartbeats, pregnancy complications, and delayed growth of infants and children. Furthermore, the effects of iron deficiency anemia on the cognitive and physical development of children as well as the physical performance of adults are major concerns. 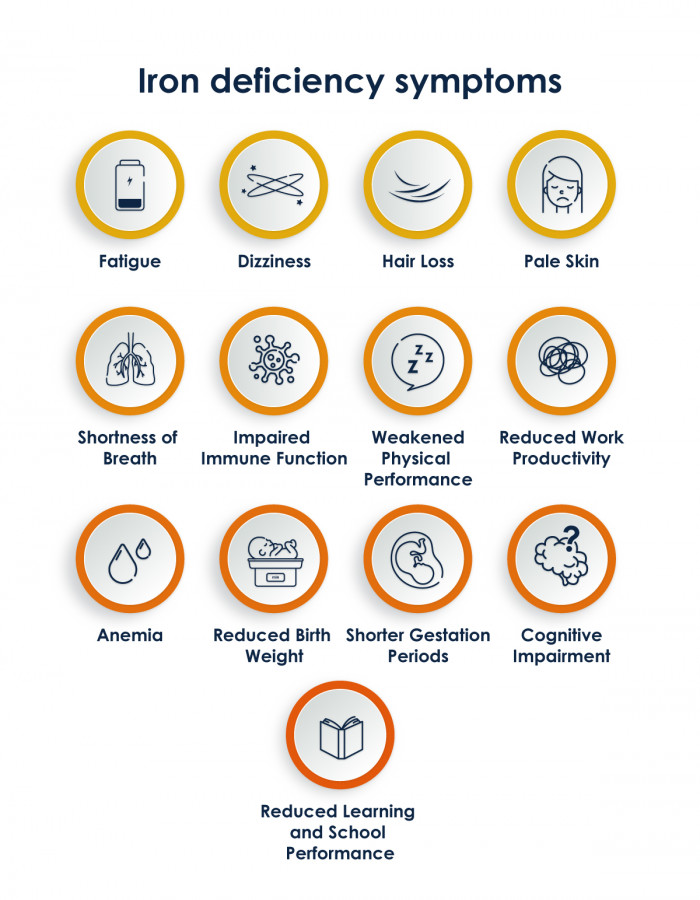 Why liposomal iron is the best iron supplement?

Usually, an oral iron supplement is recommended as the first line of treatment, since it is a cost-effective strategy for recovering iron balance. However, IT’S NOT HOW MUCH IRON SUPPLEMENT YOU CONSUME, BUT HOW WELL YOU ABSORB IT. The absorption of iron can be lowered by the consumption of iron absorption inhibitors like phosphates, phytates, and tannins in foods, as well as by certain digestive disorders. In addition, adverse side effects limit oral iron use. These side effects include metallic taste, nausea, vomiting, abdominal pain, and constipation. Intravenous (IV) iron is recommended as second-line therapy for individuals who do not respond to oral iron supplements. However, the use of IV iron preparations is painful, requires patient monitoring, carries the risk of anaphylaxis, and can result in the discoloration of the injection site. A promising new strategy for iron supplementation is liposome-encapsulated iron, an oral iron supplement with a high absorption rate, high bioavailability, and no side effects due to lack of any direct contact with the intestinal mucosa. Liposomal protection prevents iron from being degraded and inactivated in the harsh gastric environment, allowing it to be absorbed directly into the cells. In addition, liposomal iron has longer circulation time in the blood. Therefore, the liposomal iron supplement has the same efficacy as IV iron. However, the transportation of iron can be regulated by the size of liposomes. The absorption of iron highly increases as the liposome size reaches the nanoscale. Therefore, due to nanoliposomal iron's features like higher bioavailability, no side effects, and good compliance, it can be prescribed to individuals who require iron supplement administration and are intolerant to orally administered iron, IV iron, or have poor absorption of iron. Nanoliposomal iron supplements are the best iron supplements available on the market.